I plan on typing up the nice Bio that Lao wrote for Walter in “Atomic Suicide”.  But here is a great start. 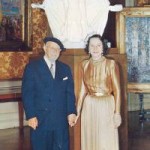 At the age of seven, while playing marbles with other boys, he felt the urge to retreat into the solitude of the woods, where, for the first time, he experienced leaving his body and feeling the ecstasy of cosmic consciousness. From then on, he had such an experience every year in May, which made him different from the other boys, with whom he could not share the ecstasy of “my world”, as he called it. It gave him inner peace on one hand, but also inner loneliness on the other. His blind maestro was the only friend of his early days.

At the age of nine, he was put to work, because the money was badly needed. He left his village school to work as a cash boy in a drygoods store. When he was fourteen years of age he had black diphtheria and was already declared dead, when he had his second great illumining (illumination), getting the knowing (knowledge) about self healing. To “the amazement of his weeping parents and of the doctors” he “arose from his bed perfectly healed”.

“Each year in May, year after year, … I south the forests to be alone with God”, experiencing the oneness of the universe. Each seventh year this experience was extremely intensive.

A musician from infancy, he secured a church organist’s position at thirteen, and entered art school. Since then, he was entirely self-supporting and self-educated.

As a young man he was an illustrator for books and magazines. In 1894, at the age of twenty-three, he married Helen Andrews. During this first marriage, he had two daughters, both born before the end of the century, and two grand-daughters. But most of the time, Russell lived alone in his studio in Carnegie Hall in New York, while his family lived in Washington, Connecticut, in a house he had designed and built for them.

“From 1897 to 1898 he was Art Editor of Colliers Weekly, then became war artist and correspondent for Collier’s and Century in the Spanish War.”

“In 1900 he completed his allegorical painting entitled ‘The Might of Ages’ which was first exhibited in the Turin International Art Exposition, winning honourable mention from Italy, then exhibited throughout Europe, winning him many honours from France, Belgium and Spain, including membership to the Spanish Academic of Arts and Letters, Toledo.”

From then on, until 1914, he mainly painted portraits of children. His principal instructors in art had been Albert Munsell and Ernest Major of Boston, Howard Pyle of Philadelphia and Jean Paul Laurens from the Academy Julian in Paris.

From 1914 he mainly painted portraits of notables, wrote books and built numerous big buildings, some of which still exist. Together with other sculptors, architects and painters he conceived the principle of co-operative ownership for flats in New York.

In 1921, at the age of 49, Walter Russell experienced his Illumination into the Light of Cosmic Consciousness during a thirty nine day and night period. His family even consulted specialists in order to decide if he had to be admitted into a psychiatric clinic. Fortunately these doctors were very impressed by his recordings and sensed, that something great was happening.

In 1927, Walter Russell published “The Universal One”, his fist attempt to explain the Cosmic Laws for the established scientists. As he failed completely, he worked another twenty years on it. The result is his “The Secret of Light”, which he published in 1947.

In 1941, the American Academy of Sciences conferred a doctorate on him, after several laboratories had isolated the elements which he had foreseen: Deuterium, Tritium, Neptunium and Plutonium.

In the meantime he gave numerous speeches and for 12 years he lectured upon the Law of rhythmic interchange and ethical principles in business to the officers and salesmen of IBM. Together with other notable figures of his time he built the ”Twilight Club“, which very successfully gave positive spiritual impulses for the betterment of humankind. Their efforts resulted in notable service organizations like the Rotary Club, The Lions Club, the Boy Scouts of America and many others. They stood up for a right of education, for minimum wages, controlled advertising and much more, getting big support from Adolph Ochs, the owner of the New York Times at that time.

In 1946, his second wife Daisy Stebbing read some of Walter Russell’s works and immediately knew, that this author was her soul-mate. She got in contact with him and later reported what he said to her during their first telephone conversation: “I know your voice. I have been hearing it inside of me for decades”. In 1948 the 77-year-old Walter Russell married the 43-year-old woman, who he affectionately called Lao, derived from Laotse. The divorce from his first wife, he had been married to for 55 years, went through the press and was met with disapproval.

Lao and Walter worked together for fifteen years and founded the University of Science and Philosophy on their splendid country estate in Swannanoa with the capital that Lao gained by setting up a cosmetics company. Walter and Lao developed the home study course and published the alerting book „Atomic Suicide“ in 1957.

Lao also wrote several books herself. Her main concern was to attach more value to the feminine, dark, discharged and expanding principle as opposed to the predominant male-concentrated principal of our culture.

Walter Russell, who was mentally awake and active right up until the end, died on his 92nd birthday, the 19th of may 1963.