So I have been really trying to understand the details of the chemical elements, locked potentials, and ratios of everything.  I was talking with a new friend who is also a Russell fan and with our dialogue back and forth, a few light bulbs went off.

I looked back at the cosmic clock diagram in Atomic Suicide and noticed a few things.  This is the one that has 2 arms on it pictured below. 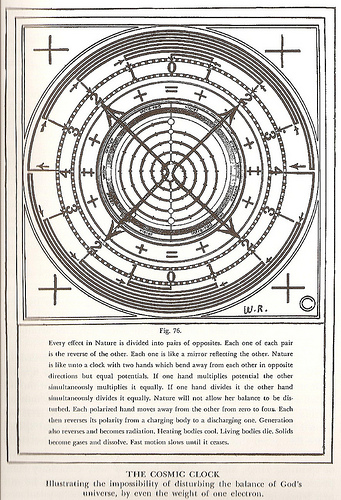 From this I noticed how this can be used to explain the inert gas/element ratios and it shows how the male and female are mirrored in every step from inert gas 0 to wave amplitude 4 and back again.

I put this quick image together to show what I mean so you can follow the clock arms around during the cycles. 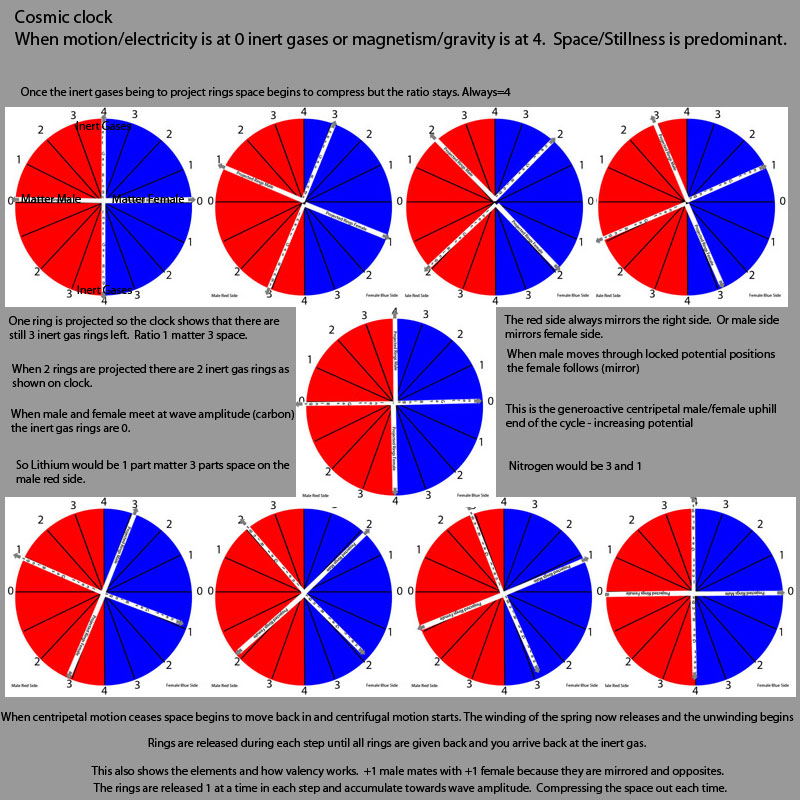 This helped me finally understand what the Russells meant by

If you now examine the chemical elements, such as oxygen, fluorine, helium, nitrogen, sulphur, phosphorous, sodium or potassium, you will find that their nuclei consists of varying sized holes surrounded by rings of varying sizes and numbers. Helium has four rings with a very large hole within them. Helium divides into four pairs and becomes a solid sphere, which has squeezed the hole outside of it. Fluorine and lithium have one ring with a centering hole smaller than helium. Oxygen and beryllium have two rings with still smaller holes. Nitrogen and boron have three rings with almost no holes. These male and female equal pairs unite in marriage and become two hemispheres, the red and blue halves being divided by an equator.   Chemists and physicists have recognized something of this mathematical orderliness and have given it the name of “valence.” They say that oxygen has a valence of two, carbon four, etc., etc., and they balance and vary their mixtures in the ratios of valence by putting two atoms, which have a valence of two, with one which has a valence of four, to equalize their potentials. This they have always done, but their text books give no adequate explanation for doing so.  The real reason is that spinning rings which get closer to their Mind-centers in the Mind-nucleus of every atom, gain more and more power in the ratio of that closeness.

From what I understand now the inert gas rings are released one at a time as the plane moves up to each locked position.  The rings accumulate until wave amplitude at 4 rings and these rings then mate with 4 mirrored rings on the opposite side.  Then the rings are released on the way back unwinding back to the cathode or inert gas.

So we can look at the elements and see that a +1 element has 1 ring that has been projected and 3 inert gas rings surrounding it.  As you move towards the wave amplitude the rings encompass the other rings and each one has a smaller hole.  This is because of the spin being faster and the compression from the centripetal spinning vortex.  So at 4-0-4 the inert gas rings are 0 and so on.

This also got me thinking about modern day science and how they talk about the decay of elements as well as certain notations they use.

2nd- If the inert gases are the 0 seed of the elements and precede them in their octave, then you would think when they decayed or progressed through the unwinding “death cycle”, these things could be measured.

Well lo and behold…  I look up a few of them and it matches with what they said.  Check Mg and you see it decays to Neon.  Check Pu and it decays to Radon(Niton).  Check K and you find Argon.  Very nice!

Now this also throws a monkey wrench in the current chart of elements that has H as the 1st element but nothing preceding it.  How can you have that without an inert gas?  How can you have a child without parents?

That sounds like another whole post about octaves and elements below Hydrogen.  Let me know your thoughts and ideas!  Thanks!

Updating to add a few new thoughts and questions:

Walter mentioned that valency could be used along with the locked potentials +1 +2 +3 etc…  But I also noticed “oxidation states” follow the same pattern.  On the red male side you see +1 for Lithium and +2 for Beryllium etc… and -3 for Nitrogen and -2 for Oxygen.  I need to learn more about it but the ratios seem to match up.  All of this needs more looking into of course.