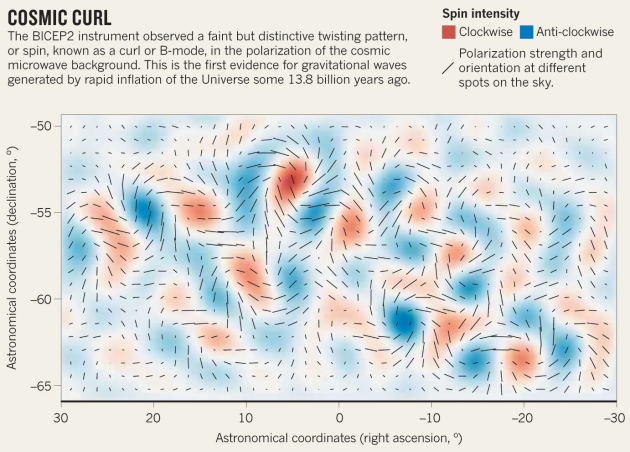 I wanted to express a few of my thoughts with all this news lately about how Astronomers have now found the “smoking gun” of the Universe’s beginning.

They say that a growth period called “inflation” is closer to being proven by the measurement of “primordial gravitational waves”, which they say are ripples in space that were generated when the Universe first started to expand from the big bang. 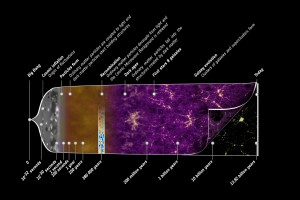 I don’t agree with this image 🙂

They say it is a glow being measured in the cosmic microwave background (CMB).  See below for definition. 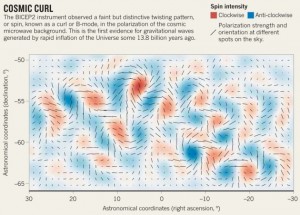 I am finding that each new announcement of a new finding shows just a tiny sliver of what I find to be true mixed in with what I think will be debunked.  The big bang, black holes, dark matter, and quantum mechanics will look much different if not completely dropped in the future if we can push the community to be a little more open minded.

Gravity waves are said to be a quantum phenomenon which demonstrates that gravity has a quantum nature like other forces and that this helps prove Einstein’s general theory of relativity.

The reason inflation is needed so badly is because the big bang has many holes, with one of them being that the observable Universe appears uniform from one end to the other.

So they have banked on inflation fixing the problem, and that this would register as a ripple in the CMB.  Polarizing it in certain curly or vortex patterns called B-modes. 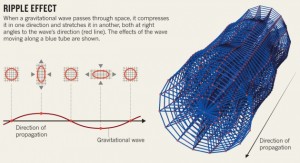 Interesting to see how the wave compresses and expands 😉

There are 2 types of polarization measurements that they talk about in the CMB.  You have B-mode = curled/vortex and E-mode = straight. Related to B=magnetism E=electricity and their respective fields. 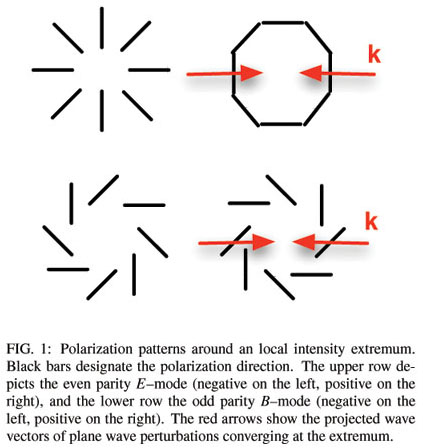 I’d like to add in here how these lines resemble the swastika/gammadion/vortex energy type flows seen all throughout history and nature.  These patterns show spin and the spiral directional flow.  These lines also look like the pressure walls that are setup between waves and wave systems.  These pressure planes are locked potentials or locked pressure positions which keep motion in an equilibrium until it is acted upon to move within the cycle.  Image below of me playing around with spin, locked potentials, etc… from a while ago. 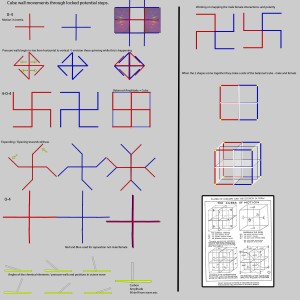 
“The CMB is a cosmic background radiation that is fundamental to observational cosmology because it is the oldest light in the universe, dating to the epoch of recombination. With a traditional optical telescope, the space between stars and galaxies (the background) is completely dark. However, a sufficiently sensitive radio telescope shows a faint background glow, almost exactly the same in all directions, that is not associated with any star, galaxy, or other object. This glow is strongest in the microwave region of the radio spectrum.”


“Through gravitational lensing, the large scale density fluctuations in the universe like galaxy clusters deflect the trajectory of CMB photons as they propagate from the surface of last scattering to us. Lensing of the CMB gives us a handle on the cosmic expansion and structure formation history. Since lensing turns E-mode to B-mode polarization, the polarization of the CMB is an excellent tracer of lensing.”


“B-mode polarization is a polarization signal in the cosmic microwave background radiation. The pattern of polarization in the cosmic microwave background can be broken into two components. One, a curl-free, gradient-only component, the E-mode (named in analogy to electrostatic fields). The second component is divergence-free, curl only, and is known as the B-mode(named in analogy to magnetic fields).  Cosmologists predict two types of B-modes, the first generated during cosmic inflation shortly after the big bang, and the second generated by gravitational lensing at later times.”


Describes a light wave that prefers to vibrate in a particular orientation rather than randomly.

Ok, so now my non-standard approach to this.

First we have the CMB.  This is microwave radiation that can be measured uniformly in our “observable” Universe.  I stated above how this was a problem with the current models, which made them look for some sort of smaller signature within it.  But what if we have something else going on?

What if we look at the cycles of the Universe differently?  I would like to think the CMB would be Nature’s invisible lower octaves.  Nature has 2 cycles: generating, living, charging and radiating, dying, and discharging.  So we should be able to measure both of these at different levels and at different spectrums.  The octaves below Hydrogen would be long slow nebulous waves that can only be measured with devices outside our human perception.  These waves interact, interfere, and compress to create the visible matter we see around us.

So could these curled vortex polarizations, along with the planar E-modes just be these same cyles of light.  I’d like to think YES.

Radiation is part of the centrifugal, expanding, radiating, death cycle of nature.  So that is usually what can be seen the easiest.  It is the centripetal, compressing, generating cycle of nature that we should focus on.  Also the fact that the Universe is not just expanding, but that there is a compressing part to it as well.  This relates to all cycles.  To have motion you have to have both ends of the see saw which forever seek balance in their unbalanced motion.

(We are focusing on the motion based physical Universe but we cannot forget the cause or stillness from which everything emerges and then returns. This should also come into play when looking at this as a whole. They explain the darkness between stars and within space by being outside of our perception but with tools like infrared cameras, we are able to see that there is light and there is motion. But they leave out the stillness that surrounds and centers each system and each atom.)

While researching these modes I came across this quote

I’ve mentioned before how important lenses are all through nature and how the vortices of creation are formed this way.  Should we not look at the concept of gravitational lensing and use this model for learning about the small too?  As above so below.  Maybe this will help in explaining all the Quantum issues we are dealing with now.   Of course, that is another story.  But basically this quote says that light is traveling through the universe hits some lensing and turns into a vortex.  Hmmm…. sure sounds familiar.  🙂

Let’s take that same concept and approach other ideas the same way!

I don’t necessarily agree with the gravitational waves as I am understanding it through Einstein’s theory.  But these waves or ripples should be happening all around us and through us.  These vortices or gammadions of light polarization and wave lens creation/interactions should be there too.

So maybe we can use some of these new findings to put together a better cosmology based on nature rather than focusing only on the sensed based reality we call home.

I hope to only plant seeds of open mindedness and exploration, as I am not an expert by today’s Scientific standard.

Much love and keep exploring!