The vortex solar system is wrong? Why it doesn’t work with Walter Russell 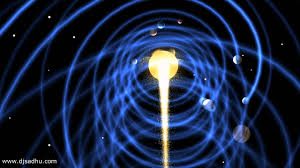 I keep seeing people post info and videos about a vortex solar system.  I wanted to address a few things here and show the contradictions to Walter Russell’s work.

There are many Russell researchers or followers who are pushing this concept.  This doesn’t make sense since it would demolish the foundation of Walter Russell’s science.

First lets differentiate between the helical model and the helical helix model.  There are some videos out there that talk about taking the 2d version of the solar system and just standing it on end and showing it moving through space.  I can agree with something like that.  You still have the planets moving around the sun and all close to sharing the same equatorial plane.  The helical helix model proposed by Dr Keshava Bhat is the one I don’t agree with.  I have read his book and it still doesn’t fit for me.  He has the sun moving through space and the planets following in its wake.  Each on a separate equatorial plane one behind the other.

Examples of the 2.
Helical model
https://www.youtube.com/watch?v=yp5kQtQwPNQ

(Edit: wanted to add DJSadhu has 2 videos  part 1 seems more plausible as the planets do not follow in th a Sun’s wake but part 2 demonstrates Dr Bhat’s model.  But, he does say in part1 how they follow in its wake)

So again…
One has the sun traveling through space with the planets moving in a helical motion but still around the Suns equator. The other has them following in the Sun’s wake.

Big difference to me.

In the video DJ Sadhu says… Like a comet dragging the planets in their wake.

Now lets talk about how this doesn’t work with Russellian Science.

Here are some excerpts from Atomic Suicide, Walter and Lao Russell’s last and most recent book.

“Nature gives no precedent for concentric shells of satellites revolving around primaries in eccentric orbits of many planes. Satellites become eccentric, and their planes of revolution vary quite markedly from the equatorial planes of their primaries, but they do not start that way. They begin as rings thrown off from equators and gradually become off-center and off-plane.”
“Consider the earth’s orbit, for another example—see B-1 and B-2. When the earth was where Mercury now is, there was but one common center of gravity, and one equatorial plane for the earth, and for the sun. The earth has now left that position of perfect balance between itself and its source and set up an equator of its own, which is at an angle of 23 degrees from the sun’s equator. Its axis has a similar variation to that of its source. It has not escaped God-control, however, for the sun’s gravity still controls it by centering a larger circle, which includes its entire wanderings around two centers instead of one.”
“Note the orbit of the earth. Its potential was maximum when its orbit was a true circle around its source. An elliptical orbit, and a straying from its plane of balance with the sun, not only widened its circle of control, but unbalanced its relations with its source by dividing its power by perihelion and aphelion positions in its orbit.”
“The earth is a dying cell thrown off from the sun. It cannot maintain its spherical form. It is flattening at the poles and cannot keep in balance with its system by remaining on the plane of the sun’s equator.”

So you see how the equators are important and how the “vortex” model takes this away.

Walter also talks about how all the planets go through the cycle of balance and unbalance.  Like walking… back and forth.  This is what keeps the planets where they are.  I think this can also be explained as standing waves.  They are sitting in nodal points like Cymatics or acoustical levitation.  This is based on their volume, rotation, revolution, density, etc…  So how could they stay in an equilibrium like situation and be fighting to stay Balanced if they are following the sun?

How could the Sun’s wavefield be this way?

I read through Dr Bhat’s book and he mentions things like “the attraction forces” and other current misunderstandings. It is hard for me to take stock in a book written with a faulty foundation.

Dr Bhat speaks about the moon and outer planets as being proof of the planets following the Sun.  But to me, it is easily explainable. With a titled axis for the moon’s orbit this would solve that. If is not tilted then that takes away from russellian science too. Remember the gyroscopic motion and top anaology? 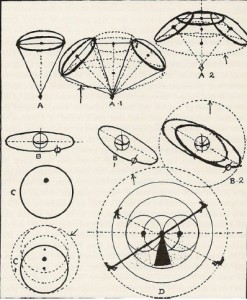 I have also seen some posts and videos about Ed Leedskalin, who I respect and enjoy his work, as proof of this vortex solar system.

The only proof mentioned is based on Ed’s “Polaris Telescope”. Saying that earth’s axis doesn’t move.
Just because he is able to line up Polaris that looks like it is moving around true North doesn’t mean Polaris is not moving.
He could still be correct if we are moving through space and so is Polaris.

Again another contradiction to Russell’s work.  But if Polaris is moving then Ed’s sundial doesn’t prove everything.  And everything is moving in space.  So how can we be so sure that his sundial is pointing true north.  Again gyroscopic motions of a top.  It wobbles…

So anyways… I just wanted to put together a quick post with my thoughts and all of the contradictions to Russellian Science.  There are some who go around policing his works and the mis-understandings but yet push contradictory science at the same time.  Hmmm….

I am not saying that either is right or wrong just it doesn’t work with Walter and Lao Russell’s Science in their own words.